This site is an archive of the work that I have completed as part of English 101 at Emory University during the Spring 2018 semester.  To find out more about the course, click here to access the course site.

When describing the importance of growth within learning, Benjamin Franklin described, “without continual growth and progress, such words as improvement, achievement, and success have no meaning.”  The intriguing part of this wisdom is the way that growth relates to improvement. Improvement can be continuous leading one to think that there is, by default, growth. However, where I disagree with this prior narrative is that, in order to increase growth, one must improve at an exponential extent.  In my perception of this concept, I have achieved my goal of increasing growth throughout this semester. Particularly, it is evident from my work within English Visual Writing and Thinking where I have improved exponentially in learning to understand literature from a visual perspective.

Prior to the beginning of English Visual Writing and Thinking, I was trapped in the quintessential, mundane learning techniques engrained within the alphanumeric texts from prior education.  As a disciplined person who is caught up in following the rules, thinking in terms strictly dictated by text is an exceedingly easy trap to fall into. Thus, I decided to challenge this framework, and myself, in this course.

Throughout this course, I have seen myself begin to think more visually, which is congruent with the results I was striving for.  As a writer, I have been able to better articulate thoughts due to a better visual understanding. The epitome is displayed from the progress from my literary narrative essay to my literary narrative comic.  I regard my meeting with Professor Morgen to discuss my assignment with the highest degree of saliency in my growth as a visual learner. Professor Morgen pointed out a particularly vivid paragraph that had a powerful influence on me as a reader.  The paragraph described when “I woke up with a nightmare. I woke up sweating, contemplating and absorbed by the dangers of cigarettes and performance enhancing drugs that was discussed in the book. This reading experience enabled me to understand my innocence.”  From this, I understood where the strengths of the narrative were and what areas I should focus on while making my comic. Thus, when it came to my literacy narrative comic, I devoted an entire page to this one instance. However, a clearer message of what I wanted to define came from this.  The visuals I drew further necessarily added increased emotion. Furthermore, I was thus able to connect myself as both the author and the reader. This is because I developed the perspective of the reader due to the focus on addressing what I want my audience interpret from my narrative. The broader lesson I took from this was not specific to this particular instance.  I now had a comparison point, and a better understanding, on how to move forward in visual thinking for other projects.

The first and second learning outcomes are attention to rhetorical composition and critical thinking and reading resulting in writing.  The first outcome includes understanding audience, purpose, and constraints. Succeeding in this was clear to me in the “Comparing Palestine and Pyongyang”.  The quintessence is my second body paragraph that delves into how “Both Pyongyang and Palestine are directed toward a Western audience, which is how the audience ought to relate to the atrocity of norms through both areas described.”  Reading these two pieces of visual journalism enabled me to understand the audience that both Guy Delisle and Joe Sacco were catering to. It was evident, through analysis of both text and graphics, that they were accounts meant to target a western audience.  As it pertains to the second outcome, this was one alphanumeric assignment that required analysis from text and images. Prior to this course, I never had to thoroughly write about a comic. An instance is where, while writing about Sacco’s stylistic choices in Palestine, I mention that  “he will typically darken the shading of scenes in order to heighten the pathos.”  Where my growth is conspicuous is in my focus on analyzing the harmonious relationship between words and images.

The third outcome is interpreting writing as a process.  Revising is clearly important because it allows the writer chances to fix imperfections.  Though, from English Visual Writing and Thinking, I was affected most by the reflections. Admittedly, I was stubborn to the idea of reflecting on my work because I believed that there was no extrinsic value.  What I realize now is that neglected the innate intrinsic value. Writing reflections for my work has enabled me to reach a greater degree of introspection. From this, I have been able to improve my thought process, focusing on my method of thinking and how I can further implement my strengths in one assignment to another.  For the fourth outcome of digital citizenship, it is best represented on my website. This is my second website that I have ever created; the differences between the two are striking to say the least. The website for this course is far more organized than my old sports blog. For my website, I am frequently updating the custom features and appropriately citing intellectual property responsibly.   This was a facet I certainly overlooked before this course.

The final learning outcome is demonstrating visual thinking strategies.  Throughout this course, this outcome is the most salient to understanding the theme of the course and is certainly my strongest improvement.  From the “Tracing Maus” assignment,  I analyzed each page while I was tracing the images.  This helped me for my formal analysis where I was able to give in depth detail of the imagery and emotion that was used within the panels.  Without this assignment, I would not have made the progress to the same extent. This is because this assignment enabled me to focus on visual strategies that Spiegelman used.  The root of my knowledge stemmed from the Understanding Comics and Making Comics readings by Scott McCloud.  McCloud gave me a foundation of the characteristics of visual reading. The sentiments from McCloud also stretched into my literacy narrative.  In the comic, I frequently used different comic strategies that McCloud explained. For example, I used the transitions page frequently, employing transitions such as moment to moment, scene to scene, and action to action.  When creating my first draft of my comic, I utilized a plethora of different comic techniques in the hope that I would settle on using one. To my surprise, the positive feedback I received from my classmates encouraged me to keep them.  Ultimately, my comic was strongly influenced by McCloud’s valuable sentiments about strategically understanding comics. This furthermore equipped me to discover my identity as a visual writer while creating my narrative.

A remarkable feature of this course is that I have already begun applying the insight I learned in my other classes.  For instance, one example is the visual notes that I used to accompany my textual notes in my finance class. When discussing capital structure, I created a “pizza pie” chart to help distinguish how the firm divides its finances.  The use of this visual chart is significant in understanding the underlying idea: no matter how the pie is sliced, it is still one pie. The reason the visual works so well is because it is easy to see that the shape and size of the pie are not changing.  Rather, what is changing is the way the pie is sliced. Therefore, the different “slices” in the pie are the different percentages in which the firm divides, for example, its debt and equity. As I aspire to have a career in business, visuals are markedly significant for personal interpretations and presentations.  I plan on using the skills of visual thinking that I learned throughout this course in order to strengthen my critical thinking characteristics in order to grasp a stronger depth of understanding overall.

As a student, being exposed to a new, distinct process of thinking is awe-inspiring.  This is especially true when it could be applied through any lense. Prior to taking English Visual Writing and Thinking, I would have certainly not considered myself a visual learner or thinker.  I have now developed a clear understanding of visual learning and thinking that will assist me throughout the rest of my learning experiences. As a student, learning is the most salient objective.  Thus, discovering a new way of learning, I assert that I have experienced monumental growth. 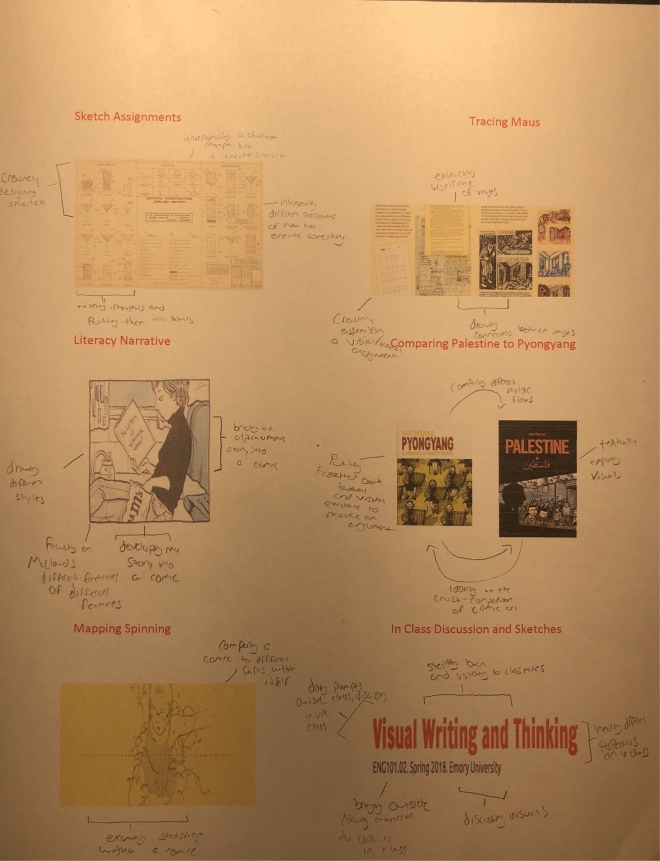 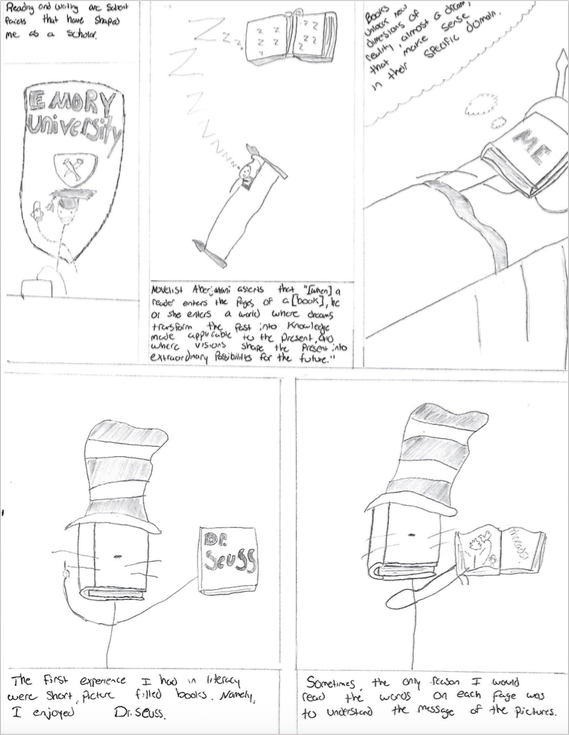 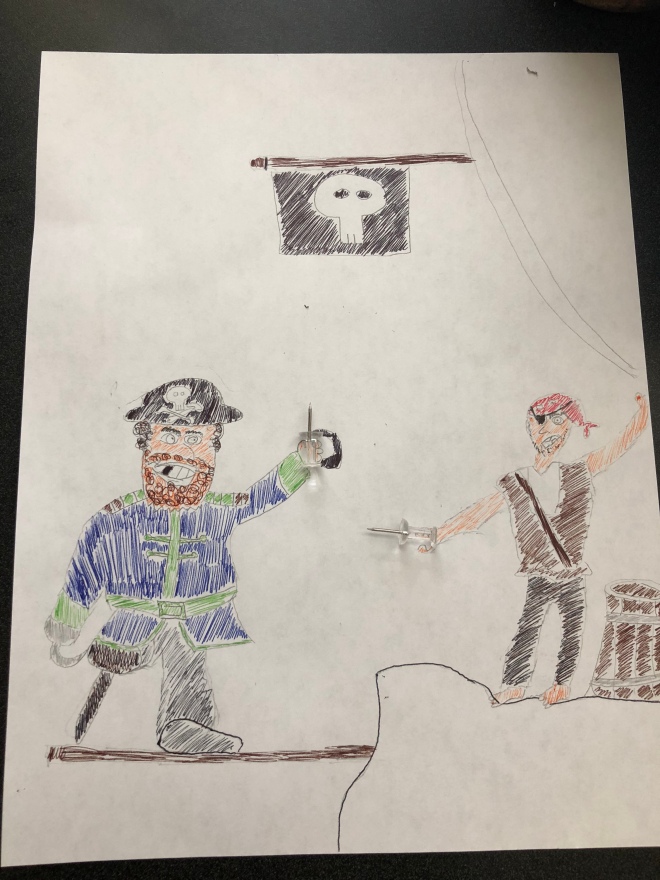